[New for 2011, lost the Duff branding in 2015] Of all the new flavors that Blue Bunny came out with this year, Red Velvet has by far been the most talked about around here. Actually, it's kind of been the year of Red Velvet. Stone Ridge was ahead of the curve by releasing their Red Velvet ice cream last year, but things have gone into high gear as both Blue Bunny and Ben & Jerry's have released Red Velvet flavors. (You may remember I was overpowered by the B&J version). 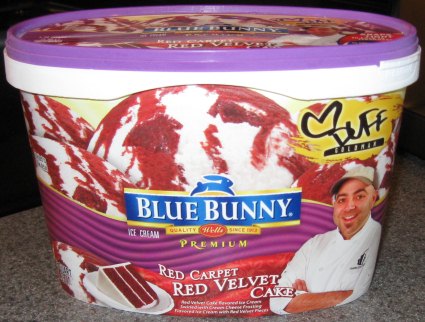 So, finally, on the blog, may I present the Duff Goldman inspired Red Carpet Red Velvet Cake Premium Ice Cream. wow, looks at those bright red streaks on the packaging, that is some unique ice cream, I hope it's nice and cakey! 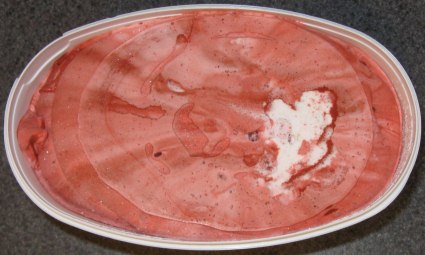 HA! Check out the opening shot! That is some mighty red ice cream! 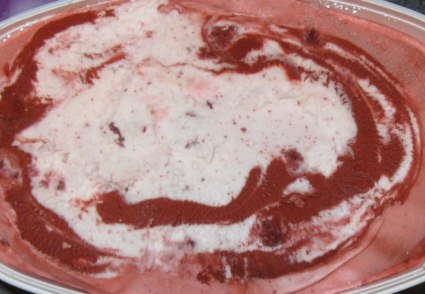 Ok, there's a better view of what is really going on. It's big honkin' red velvet cake ice cream swirls. I have never, ever seen anything so red in my life. You can spy red velvet cake pieces here and there, but that red swirl has my attention. Notice how there are flecks of red ice cream in the cream cheese frosting flavored white ice cream. Interesting.

I start spooning my daughter a bowl when I realize I'm not actually sure if she's going to like it. I take a quick bite and I'm not really sure if I'm going to like it. I load her bowl up with whip cream and cookie crumbs to make sure she enjoys it. I'm tempted to do the same, but I decide to go for a small bowl of just ice cream so I can do a true test (well, one squirt of whip cream won't hurt).

I start to dig in, and to be honest, I am unamused. When I dug into the Ben & Jerry's version, there was this overpowering flavor warfare going on for top spot. Here, everything is mellow, but in a weird way. It's like someone taping you on the opposite shoulder. The flavor is there, but it isn't. I don't think it's strong enough to appease the red velvet crowd (or the cream cheese crowd), but it's there just enough to make me confused. I kept trying to enjoy it, but I just couldn't.

Ok, that's all I got I guess. I've enjoyed Strawberries are Forever Shortcake and Triple Chocolate Cake, but this one just isn't for me. I hate using the term "weird" to described an ice cream, but that's how this one hits me. The flavor is just half there and it makes me not want to eat it any more.

Verdict?  Not for me
Buy Again?  Nope.

On Second Scoop: I was obviously dismayed with my first scoop, so I decided to make the second scoop a shake... though I think only 2 out of 3 scoops landed in the cup (hey, that 3rd scoop had a cake bit in it). The flavor just seems so mild to me, I feel like I am missing something. I add the milk to my shake and start stirring. Oh my, this is boring, I think I will add some Nesquik... BOOM! All of a sudden the flavor has popped back to life! I'll admit I am a novice in the world of Red Velvet, but adding chocolate really did bring the cake flavor to life in my shake. Strangely enough, I could barely taste the chocolate, it was all about the cake flavor. It actually tasted like I expected it to taste. Live and learn! 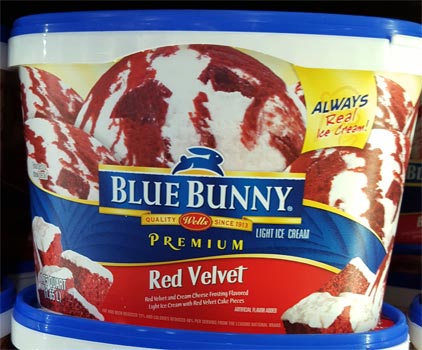