The Pike was all backed up last week so I decided to take a new way home, and I'm glad I did because I discovered a Roche Bros grocery store near work. Stop laughing, I said Roche, not Roach... oh nevermind. I shop at a lot of places to keep this blog going and it's nice to find a new grocery store chain because they are most likely to have different products (at a decent price).

I headed over during lunch on Thursday and found what I was looking for. Sure, I wasn't real excited at first, but then I saw it, Gifford's of Maine ice cream right here in my own backyard. Look, if I say Vermont, you say "Ben & Jerry's". If I say Mass, you might say "Brigham's" or "Friendly's" (or Hood), but if I say Maine, your answer should be either "Shain's of Maine" or "Gifford's". I don't mean to get too excited, but keep in mind that I haven't seen Gifford's in a grocery store since visting Ben & Jerry's (photo proof here).

Now Roche Bros has got some of Gifford's traditional half gallon containers down bottom, but most of this freezer section is taken up with their (new size?) quart containers which are on sale at 2 for $7 (no shopping card required, yippee!) 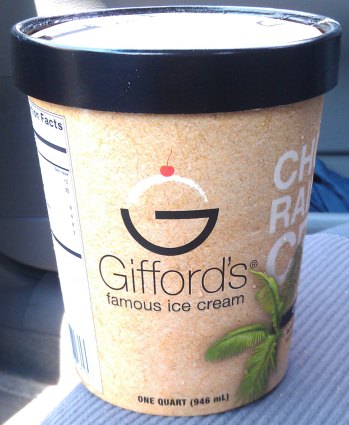 Now I had an awful time picking what I wanted. Do I go with the local favorite Grapenut? Do I give their black raspberry frozen yogurt a try? So many choices, but I kept coming back to the one you see: Chocolate Rainforest Crunch! Don't even try to pretend like that doesn't sound fun. 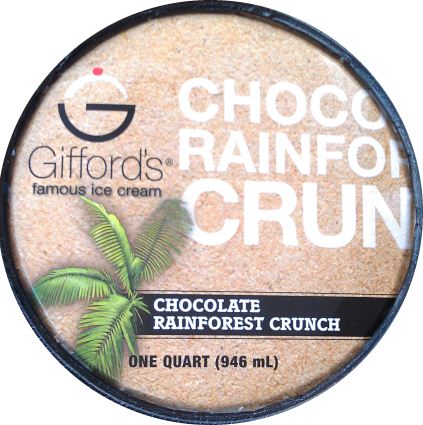 CFC is " Velvety caramel rippled through our World's best chocolate ice cream, all decadently loaded with candy-coated cashews and melt-in-your-mouth chocolate flakes ". Again, don't even try to deny that it's fun to say, let alone sample. I'm not even sure if I've ever had cashews in my ice cream (Ok, I did once at a local place). I'm not sure I dig the packaging, but I definitely dig the rich description. 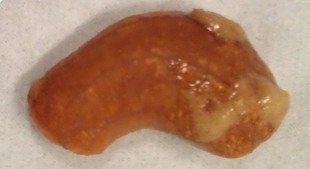 Here's one of the cashews, and "candy coated" may have been a bit of a stretch as you can see just a bit of sugar plastered to this little bugger. Jsut so you know, the coating looked like this before I washed this off carefully in the sink so it's not like it wore off. Also, between the first and second scoop I've gone through about half the container and I've hit less than a half dozen of these. You can't tell, but this is actually half a cashew, so their overall impact on the ice cream is limited (tasty when you hit one, but limited) 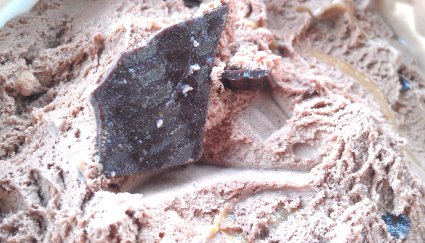 Now don't fear too much, this is still a nice ice cream. Above you see one of the rare huge chocolate flakes, but overall there is a good amount of regular sized flakes and they definitely add the crunch to rain forest crunch. They are prevalent in pretty much every bite.

You know what's weird, when I first had this on Thursday, it was very soft from being in an open freezer and by the time I was done my first scooping, I would have said this flavor was like Fair Goodness Cake but without the coconut. However, when I had some on Friday and it had a chance to resolidify, I didn't get that same vibe. I think it's because I got less of the swirl. I preferred Friday's more solid texture, but honestly, I enjoyed the sweeter nature of Thursday's tasting.

Sorry, I'm talking in circles aren't I? The point is that this has a nice chocolate base that's not too heavy (it's not super premium). The caramel swirl is gooey, sweet, rich, and no nasty aftertaste. The flakes, made of real chocolate, are there to add the crunch. The cashews are nice, but I wish there was about 3-4 times more of them. This was a nice introduction to Gifford's for me, and I look forward to picking up more of their flavors. 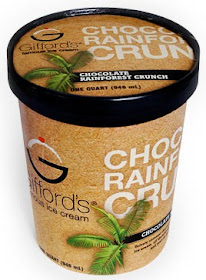 Oh, before I go, can we talk about the packaging a little more? There is a very happy blog post from May 2011 saying how proud Gifford's is of their new look. What are they talking about? I really don't like it at all, so I quick asked my wife what she thought. "oh it's nice, the ingredients really stand out on the tan background". Funny, that's what they said... then she looked closer and saw what I saw : the background looks like sawdust or sand. Why would you texture your packaging as something so dry when there is something so wonderful inside? I was literally put off by the containers. Now I know there was good stuff inside, but the packaging just screams "don't eat me". Am I being a little harsh? Let me know because maybe I am... or maybe there is still time for Gifford's to get their money back from the marketing company they hired.