Ok, let's start with the bad news: no more BR reviews for awhile since the insiders program has been suspended. Man, I'm going to miss those happy boxes arriving every month!
With that in mind, maybe it was fitting that we got the world's saddest drive thru person on our way home from Jersey yesterday. I asked for milkshakes and you could just hear the sadness in their voice. The fact that they didn't have any simple options (outside vanilla) meant that the sad person had to rattle a long list of long flavor names. In the end, we wound up going with... 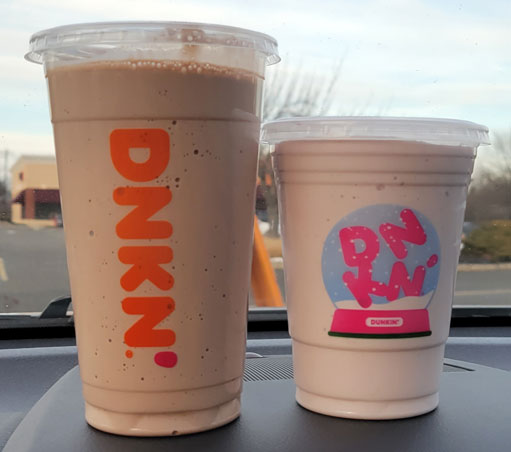 
So, B-R shakes are definitely thicker than something like a DQ shake, so that's a positive. That said, my overall feeling was that there was a little too much milk in the mix. That translates to the overall texture being a little too thin (compared to something like a fribble) but it also means that it dilutes the flavor a little too much as well.
Let's also factor in that world class chocolate is actually milk chocolate and white chocolate mixed together, so it may not necessarily be the best choice for a milkshake flavor. The Mrs went with Icing on the cake and I feel that the flavor was definitely more pronounced, but it too did seem to suffer from a bit too much milk. (to be specific: It almost had a bit of a strawberry vibe because of the sweetness, plus the cake component added some extra texture)

Now, I assume they have some directions to follow, but since it's January and it took them a really long time to make these, I could hazard a guess that there's room for error. In other words, your mileage may vary, and also, have you ever tried their shakes?
Verdict?  Cake was more flavorful than WCC
Buy Again?  in a pinch
Dubba Scoops
Share