So Nestle (Edy's/Dreyer's) isn't the only company with a banana based frozen treat on the market right now. At both Wegman's (regular $6.49) and Market Basket (regular $4.89), I found Snow Monkey which has Banana Puree as it's primary ingredient. The flavor line up is Cacao, Matcha Green Tea, Cinnamon, Passion Fruit, and Goji Berry (with the last two having no added sugar). The big selling points are vegan, paleo, nut free, dairy free, and 21 grams of protein per pint. 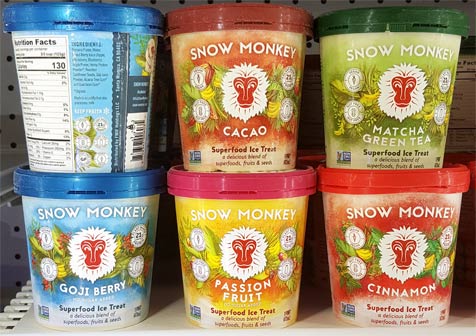 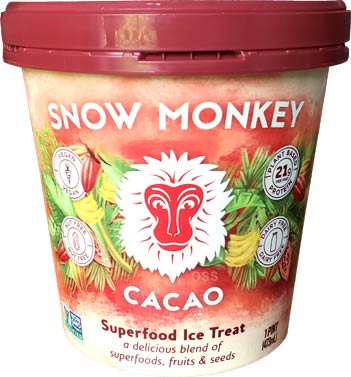 Now I was tempted to buy these for my son, but I didn't jump on them until they were on sale for either $3.50 or $3.99 I believe. I'm not crazy enough to try all 5 at once (especially on something like the one that mixes green tea and banana), but the chocolate one seems like the most likely to win over my son. There is no cream or anything so this one is rock coming out of the freezer. I'm sparing you the opening freezer burned shot as this has been in my fridge for a good month, maybe two.

We wait about 7-8 minutes and my son is getting pretty hungry, so he decides to eat it as is. He says it smells like his beloved Polish Ice and takes his first (tiny) bite. He says it's delicious....   a statement he takes back about 90 seconds later as his tiny scoops eventually make him realize that this tastes way more like banana than chocolate.

I take a very small bite and I get what he's saying. Also, it's way more like italian ice or sorbet than ice cream. I scoop some in to a bowl, let it melt for about ten minutes, mix it up, and then try to get my daughter to eat it. Nope, not a fan either. The problem is that none of us are banana fans, so it's got a lot to overcome to win any of us over. I am a little curious if I could make a half decent shake with this stuff, but that's an experiment for another day.

"Dubba, why even bother reviewing this stuff?". Well, for a few reasons. One, I really was hoping my son would like this stuff even if it was a long shot. Two, I want you to know it's out there. Three, I want to open the floor for discussion on this product. Have you had it? Would you try it? Which one would you grab first? Does $6.49 seem like a lot to risk on a fringe product?