[Both 2015-2016] Alrighty folks, it's time for a Friday Saturday night fight. And we're going to do it a little different this time. Not that there are any rules, but this particular fight is going to be based on size, quarts in particular. That's right, with main stream companies dumping premium quart sized products on us, it seemed like a good time to (hopefully) help us know the difference between....

Now I know that Vanilla isn't the most exciting flavor for the majority of our readers, but these are the only flavors that line up between these brands amongst the dozen options you are now seeing on your store shelves. 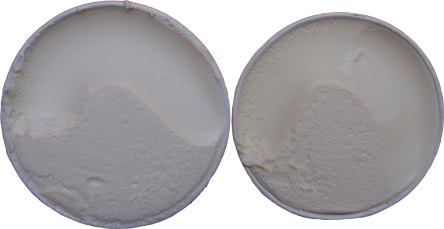 Do you see how the Edys / Dreyers is just a little more off-white (yellowish).
[Both look quite dense] 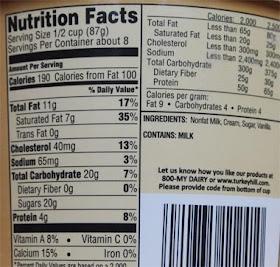 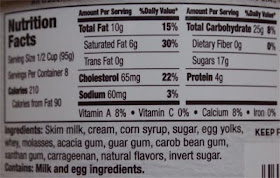 Edy's : ummm, why is there molasses in here?
(notice vanilla is jammed into "natural flavors")

I try the Edys vanilla first. it's dense, it's decent, but do I detect a hint of... flare? I tend to be over sensitive to molasses and such but I swear I can taste it.

I try Turkey Hill. It's very simple, much like there all natural ice cream lineup, but a bit dense/creamier. I think the Edy's is messing with my taste buds and this is why we don't do head to heads like this. When flavors are this close, things get confusing quickly.

I take a break to type, rinse with water, and dig back in to TH... wait, I forget which bowl is which... just kidding... I think. Anyway, there's almost a cake batter vibe in the TH. Plus, no offense TH, but calling this gelato is a stretch.

I try the Edys again and yeah, the flare just isnt sitting righting with me. It's just not my style.  I'm going to go cook dinner, but I'm going to try this again in a couple of hours

Hey, I'm back! I'm digging in to some of the turkey hill gelato and it's sweet, it's clean, and it reminds me nothing of gelato. I still think I taste cake batter. I'm sure there are some fancier words to use, but this is me here. It's nice, no major complaints, but it's not what I was expecting. It's sweet but not sugary sweet or vanilla bean sweet, there's something more... ahhh, I don't have the words!! It's ice milk, what can I say.

And now back to the Edy's... which isn't doing a ton for me honestly. I don't taste molasses now during the bite, but I swear it's part of the aftertaste. Oh, what can I say, the whole eggy vanilla just isn't doing a whole lot for me today. I'm almost having mild flan flashbacks. I think it's just the way the flavor profile mixes with the denser custard to give something I'm not use to and just isn't hitting the spot for me at the moment. I don't really like the way their custard hangs on my taste buds either. I prefer the cleaner Turkey Hill.

I was going to make this a Friday night fight, but I really wanted to get in next day scoopings of each of these. I tried Turkey Hill in the morning and it's fine, but it's not gelato and it's not something I would pick up again. There's a bit of (floral?) something something going on and it's just not my style. And I wouldnt call this gelato. It's frozen ice milk. It melts in to an icy cold puddle of milk. I like that it's super cold (unlike some fake gelatos), but it's doesn't have that density of Talenti or Gelato Fiasco.

I take one more small bowl of the Edy's, and I don't hate it, but I have zero reason to buy this again. If dense custard is your thing, that's fine, but I'd love for some midwesterners to chime in and tell me how close this is to real custard. For me, the flavor isn't strong enough, it's too gummy, and I just don't like the way it lingers. There are so many awesome vanillas out there, I don't know why I would bother with this one.

P.S. On Sunday, I added some Nabisco famous wafers to some softened Turkey Hill and it was pretty good, that whatever of the TH gets skewed and your brain starts thinking it's Oreo cream. I still stand by my original opinions, but at least it won't go to waste.

P.S.S. Though she preferred the Turkey Hill, my wife says she'll have no problem finishing off the Edy's for me. That's great because then I can focus on their more exciting custard offerings.
Dubba Scoops
Share